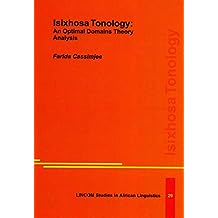 This content was uploaded by our users and we assume good faith they have the permission to share this book. If you own the copyright to this book and it is wrongfully on our website, we offer a simple DMCA procedure to remove your content from our site. Start by pressing the button below! An integrated theory of autosegmental processes Home An integrated theory of autosegmental processes.

Mathematical theory of optimal processes. Vowel harmony in Akan: a consideration of Stewart's word structure conditions. Connell, Bruce A. Statistical demonstration of a meaning: the Swahili locatives in existential assertions. What is a "negative equivalent"? Ideophones defined as a phonological class: the case of Yoruba.


The syntax and semantics of the morpheme ni in Kivunjo Chaga. Subject identification strategies and free word order: the case of Sandawe. On the justification for language-specific sub-grammatical relations. Niger-Congo noun class and agreement systems in historical and acquisition perspective. Object clitic pronouns in Bantu and the topicality hierarchy. The historical development of southwestern Mande consonants.

KiSwahili diglossia in Kenya: implications for language policy. Swahili gestures: comments vielezi and exclamations viingizi. An alternative to lexical insertion for Yoruba complex nouns. Morphology of the gerund in Degema and its reconstruction in Proto-Edoid. Possessive pronominalization and the so-called picture nouns in Efik. The so-called reflexive pronouns and reflexivization in Ibibio.

The history of the middle in Dogon v. Rivers pidgin creole English: tone stress, or pitch-accent language? Hlonipha - the women's language of avoidance among the Xhosa. The use of L. Magyar's records for the history of Umbundu.

Hausa disyllabic verbs: comments on base forms and extensions. Implications for universal grammar of object-creating rules in Luyia and Mashi. The representation of vocalic object-affixes and tense-affixes in the Bakweri verb. Dependent modals, performatives, factivity, Bantu subjunctives and what not.

The magical number two: Bantu pronouns and the theory of nominalization.

On cost accounting in lexical structure: a reply to Frank Heny. Niger-Congo noun class markers: prefixes, suffixes, both or neither. Head-inital meets head final: Nominal suffixes in eastern and southern Bantu from a historical perspective. Hayward, Richard J. Connell Observations on Kunama tone v. Bantu lexical classes and semantic universals with some remarks on how not to write phonological rules. Morphological palatalization in southern Bantu: a reply to segmental fusion. Prefix restructuring, lexical representation, and the Bantu noun. Spatial perception and linguistic encoding: a case study in Hausa and English.

Universals of downdrift: their phonetic basis and significance for a theory of tone. The Arabic doubled verb conspiracy and morpheme invariance. The Kanuri associative postposition: a case for subordination. The role of definitization in relative clause forming strategies.

The role of borrowing in the justification of phonological grammars. Dependency relations in syntax: the mysterious case of the empty determiner in Aghem. Hyman, Larry M.

Vowel harmony in Gunu v. Welmers: a biographical sketch and list of publications. Restrictive vs. Some considerations in establishing the basic word order of Podoko. Abstract analysis and Bantu reconstruction: a Luganda example. A semantic description of temporal reference in the Kikuyu verb. Morpheme alternation in Tangale: a syllable structure approach.

Doublets in Kinyarwanda: an inquiry into the process of sign-production. On the interaction of phonology and morphology: a Chi-mwi:ni example. Yoruba relativisation and the continuous segment principle. Some Yoruba quantifier words and semantic interpretation: a reply to a critique.

Tonal feet and the adaptation of English borrowings into Hausa. Swahili demonstratives: evaluating the validity of competing semantic hypotheses. Response to Wilt, "discourse distances and the Swahili demonstratives". A diachronic-tonolgoical analysis of certain rank shifted verbal structures in northern Sotho.

Storyline concerns and word order typology in East and West Africa monograph. A possible new cause of tone-splitting: evidence from Cama, Yoruba, and other languages. The analysis of complex phonetic elements in Bura and the syllable. Size and shape ideophones in Nembe: a phonosemantic analysis. The ideophone as a syntactic category in the southern Bantu languages. The religious factor in language nationalism: the case of KiSwahili in Kenya. Relativisation and the ordering of cross-reference rules in Hausa. Noun classification in Wolof: when affixes are not renewed. Some phonological problems that face Arab learners of English.